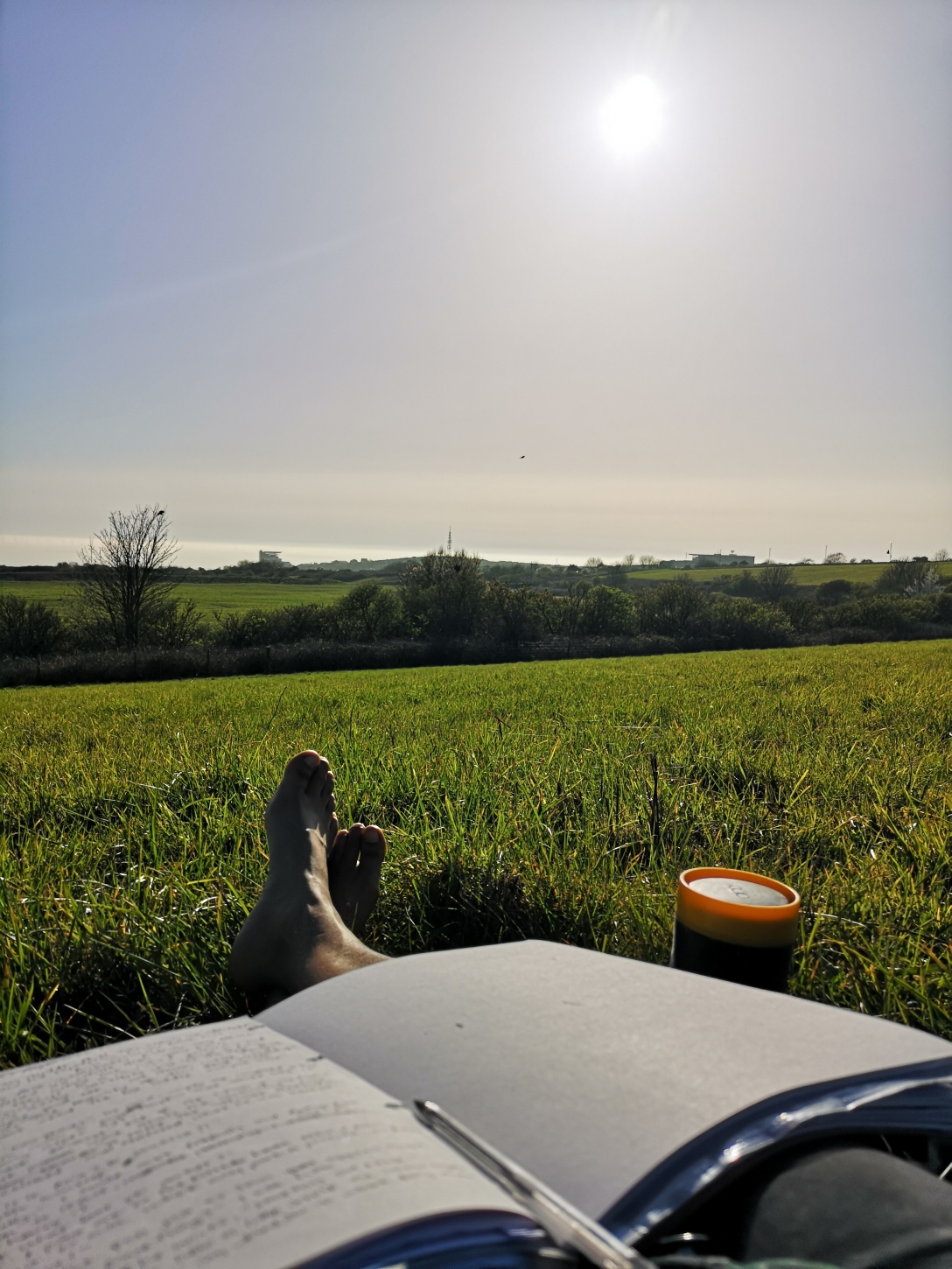 Josephine was born and grew up in rural West Cornwall with her sister, and their Jamaican father and English mother. Her parents moved from London to Cornwall in the 80s and renovated an old farmhouse into the family home where they still live today. Surrounded by fields and farmland and just down the hill from a view to both coasts, the house is a twenty minute drive/an hour cycle to get to a selection of sandy beaches and dramatic clifftops.

Josephine’s father arrived in England as part of the Windrush generation in the early 50s when he was a few years old and then grew up in Wolverhampton. His ancestry stretches back to include Nigerian, Kenyan, Sierra Leonean as well as some European. Josephine’s mother grew up in Surrey and her heritage stretches back to include Irish, Jewish and Eastern European roots.

Josephine is dyspraxic and was a late speaker. She really loved going to speech therapy as a child because there was a doll’s house there and she was encouraged to make up stories. She loved to write and make up rhymes, often writing them up in little booklets (she hadn’t heard of zines then), along with illustrations and sometimes even a performance for the family.

Although Cornwall was a beautiful place to live, growing up with a brown face in a very white place was often challenging and alienating. Writing and creativity became a place Josephine could escape to, a place to find refuge and healing, a place where she could create new realities, step into other people’s shoes, or simply express herself and explore her identity, place and purpose in this world. As she grew, Josephine began to realise that creating things was also a way to connect with others – that creative collaboration could be a place where she could belong, and where she could help others realise that they belong too. She began to understand that creativity could communicate things that she sometimes struggled to articulate with speech.

Josephine learnt the piano from a young age and music has always been a big part of her life. In her teens, she started writing songs and playing in bands. She studied Creative Arts (specialising in Creative Writing & Art) at Bath Spa University where she often worked collaboratively to create interdisciplinary pieces crossing over writing, art, music, performance, and film. She also became interested in the genre of life-writing and in her third year she started working on a project which became a self-published book in 2012 (Is This The Future? An investigation into Communal Living) and led onto a follow-up trip visiting eco-villages and communities in France & Spain which she documented via her blog.

In 2013, Josephine was diagnosed with Depression and Generalised Anxiety Disorder following a particularly debilitating period of being unwell. A regular writing practice supported those initial months of recovery and writing therapeutically continues to help Josephine to keep on top of her wellbeing. Over the next year or so, Josephine wrote songs, sang and played keyboards in a band called Ejukashun. She also moved to Brighton for the first time, where she continued to write (mainly poetry and songs) for herself, and the occasional open mic audience.

In March 2016, Josephine was one of twenty-three strangers who took part in Keo Films’ experimental television programme, Eden – commissioned by Channel 4. She lived for the next year on 600 acres of the wild and remote peninsula of Ardamurchan, on the west coast of Scotland. There, she built a house which she lived in for six months over winter, helped care for animals, grew and foraged food, wrote songs on the ukulele, ran a couple of writing circles and enjoyed living simply and in tune with the natural world. She was one of 10 participants that stayed for the entire year.

After Eden, Josephine was eager for movement. In 2017, she hitchhiked with a friend from Brighton to Spain and wrote a blog and then later, set off on her own hitchhiking trip from Brighton to Portugal after being invited to speak at Hitchfest 2017. Also keen for some different communal living experiences, that year she wrote an article for Permaculture magazine after visiting Windsor Hill Wood, a woodland community refuge in Somerset.

In 2018, Josephine returned to Brighton and connected with Writing Our Legacy – an organisation that raises awareness and supports Black and Ethnic Minority (BME) writers, poets, playwrights and authors born, living or connected to Sussex and the South East. In 2019, Josephine published her poem ‘There Are More Shells Here’ in WOL’s Hidden Sussex Anthology, and a life-writing story – ‘Silenced, Hungry and Furious’ in ‘Who Are We Now? A collection of true stories about Brexit’, edited by Katy Massey. Later that year, she travelled overland from Brighton to Istanbul – raising money for Grassroots Suicide Prevention – and then spent the winter in Sri Lanka and South India. This 6 month trip brought up new reflections for Josephine around her identity as a Black ‘British’ mixed race female. She is in the early stages of planning a novel which will be partly inspired by her experiences of hitchhiking across Europe.

In 2020, Josephine worked as a commissioned artist with Quiet Down There CIC on their Laundrette project – culminating in a poetic zine, inspired by conversations with local laundrette workers and customers – called ‘Hope & Laundry’. In the summer, she released Sick & Tired – an audio/visual piece based on a poem, created collaboratively & raising money for Black Minds Matter – as part of the anti-racist creative resistance. Throughout the year, she also wrote for Black Ballad, The Great Outdoors Magazine, Future Bookazines and was a guest on a few radio shows. At the end of the year, she was thrilled to find out she’d been awarded the Developing Your Creative Practice fund from Arts Council England.

Thanks to the ACE funding, in 2021 Josephine has made a start on researching, developing and planning her first novel. She hopes it will be a multi-layered tale of adventure that explores how identities can shift and redefine, and shows people of the global majority* existing in varied spaces and places. She is also developing audio/visual work and poetry, whilst experimenting with other art forms and working with new collaborators – with plans to release new work in the summer. Her creative work tends to explore themes around identity, place, creativity, adventure, nature and healing.

From January to April 2021, Josephine co-hosted a radio show on Slack City called The Jam Box which celebrated writing and music by the global majority. During May 2021,  Josephine’s words and voice are part of Tenebrae: Lessons Learnt in Darkness – a collaborative Brighton Festival project that reflects on the numerous ways in which we’ve all been living with the darkness of the past challenging year.

Josephine has had a few homes, and her identity – and sense of what it means to belong – is constantly shifting and redefining. She is interested in the interconnections of the different crises we find ourselves in and how she can respond creatively in a holistic and authentic way.

Josephine is currently based in Brighton and is most at peace when out and about in nature, snuggled up in her nest with music, books and Hailey the cat, or laughing with loved ones. She likes to write outside or at least next to a window, preferably with bottomless herbal tea.

*the term ‘people of the global majority’ is an alternative to BIPOC (Black, Indigenous and People Of Colour).