Waking up on a deserted beach = Bliss.

I had a morning swim and wash in the sea whilst O started the fire, then we swapped and I boiled some water for tea whilst O washed and swam. For breakfast we had our last two kiwis and dipped into our emergency peanuts and dark chocolate stash and then sat back and enjoyed the peace and quiet of the empty beach.

There was no follow up to the lights we saw last night. O had stayed awake longer than me and watched the lights move around up on the road and eventually disappear.

The sea water O had boiled last night had indeed reduced down to salt! It was still quite moist and clumpy and O thought we could surely get more out of it, so we added some more water and put it back on the heat of the fire. 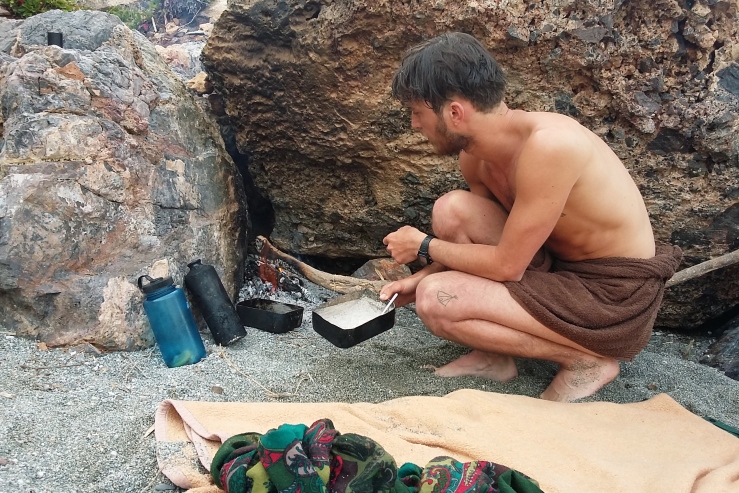 It was getting set to be another beautiful day, and we took our time getting ready for the day ahead. Had we not been running low on water, we probably would have stayed at the beach another day.

Some divers arrived at some point and greeted us with a friendly wave. I bet it is great for diving around there, even from the beach we saw some interesting bright orange algae of some sort on a distant rock.

The sea water had reduced down and we had a nice amount of salt – enough to fill an old film canister, plenty for rest of trip – this would certainly improve our salads.

We got our things together and headed for the road, this time walking straight up the cliff so O could check out the ruin on the way. We agreed our spot on the beach had definitely been the right choice.

We were heading east, continuing in the direction we aiming for yesterday – before we decided to stop for a swim and never left! Our phones were both completely dead at this point but from our memory of maps, there should be a town fairly near by where we could recharge and get water and food. (We discussed that next time we should take a paper map.)

Our reluctance to leave the beach meant we were walking in the main heat of the day once again. Oops. At narrower bits of road, we had to walk on the other side of the barrier and when there was a tunnel we took the route of the old road. We had signs on our bags and each time a car was coming behind us, we stuck our our thumbs and tried to turn slightly to give them a smile.

We were getting very hot, and there was still no sign of a town. After about half an hour, O turned to me and pointed at the next corner up ahead.

“Let’s stop at that viewing spot there.”

I nodded in agreement, too hot to speak.

But before we got there, a car pulled over!

It was a friendly couple, listening to reggae on their way to town to get food to take to the beach – they were actually heading to Playa de Rijana, where we’d just come from.

It turned out the town was not much further, it would only have been another twenty minutes walk but it was good to get a lift in the strong heat of the day.

We arrived in Castell de Ferro and said our thankyous and goodbyes to the couple before heading to the supermarket. It is so cheap to eat simply in Spain, compared to in the UK. We got three baguettes, four tomatoes, two oranges, a tin of olives and a tin of sweetcorn for €4 (!!!) and headed to find a spot of shade on the beach to eat lunch. On the way, we stumbled upon a water fountain, had a long drink and filled up a bottle.

We sat and feasted on salad, bread and a lot of olive oil. This time we had sea salt and rosemary (I’d foraged from the cliffs around the beach) to add to our salad. It was great.

After lunch, we found a cafe with plug sockets and got a coffee whilst charging our phones, caught up with our messages etc. and consulted maps to make a plan. We were wanting to head to the Cabo de Gata Natural Park – we’d been recommended some beaches by a few people we’d met and it sounded like a beautiful place. O was looking into the best areas to go to when he discovered that wild camping in the park was ‘strictly forbidden’ and could lead to large fines. Shit. We would have to come up with another plan at some point.

Due to the last minute nature of this trip, we did very minimal research before leaving Brighton. However, this is part of what makes the trip so fun – having to come up with quick decisions and solutions to problems – and empowering, that feeling of complete freedom.

We left the town and headed towards the entrance to the motorway, trying to hitch a lift along the way. It was an uphill walk and we had quite a lot to carry now we were fully stocked again and after half an hour or so we stopped for a break. We hadn’t stopped for long when we saw a landrover campervan coming towards us.

Neither of us had ever seen on of these vehicles before. We stuck out our thumbs and waved our signs, but it seemed the van was passing – and then it stopped just past us! We went over.

“Where are you going?”

We told him Almeria, although our ultimate destination was the Cabo de Gata Natural Park – but we thought it would be easier to say Almeria at this time of day. He was obviously a man of little words, but he opened up the camper and signalled for us to get in.

It was awesome inside, simple but homey with brightly coloured decorative things around and Che Guevara stickers dotted here and there. We sat at the table – very civilised! – and I was able to catch up with some writing.

After an hour or so, we arrived in Almeria and our new friend pulled over and opened the door for us, asking if we’d been comfortable.

We asked where he was going – he was going to the Cabo de Gata! O and I exchanged a look of ‘shit, he could have got us all the way there’. We told him that was actually where we were headed.

“Maybe tomorrow?” He said, “Almeria is a good place to spend the night.”

So, we made our way through the town. We were both desperate for the loo and were looking around to find one. Remembering what Francisco had told us before, we headed for a supermarket but the toilet was locked and the cashier clearly was not going to give us a key until we bought something. They were also not happy that we’d filled a trolley with our rucksacks and didn’t let us take it in. This all dampened our mood somewhat, on top of the worries about how we were going to get to and then camp in the Cabo de Gata.

So, O went in to buy something whilst I waited with our bags and searched the Couchsurfing website for available hosts. Eventually, we purchased some fruit and were allowed to use the toilet.

By this point, we were both feeling a little grumpy and were missing our perfect beach we’d left that morning. Why were we in this town again?

We decided to treat ourselves to a beer and some crisps and sit down by the water to decide our next steps. We sent a few Couchsurfing requests and then thought – let’s just see how much hostels are. We found a hotel for €30 and thought fuck it! We headed in that direction.

On the way, we realised that Almeria actually seemed like a nice city with a good atmosphere and friendly people. We checked into the hotel and I got in the bath.

We were soon fast asleep in a big comfy bed.