Our cosiest night of sleep yet! It was so awesome to go a whole night without waking up cold at any point; there has been some uncomfortable nights on this trip.

This evening, the sea is still looking pretty wild and is near enough impossible to get down to from where we are, but we’ll stay here another night as it will be somewhat of a novelty to sleep in one place for two nights in a row!

We had a lazy start to the day in our little hidey hole and then headed out into a spot in the sunshine for brunch. I made a salad with the supplies we bought yesterday and we munched on that with bread and a whole lot of olive oil.

We had a lovely slow morning of eating, sunbathing, chatting etc. and then moved location mid afternoon to the highest, furthest-out-to-sea rock we could get to from our hidey hole. It was amazing to look back the way we’d walked; it looked like the gap between the rocks was completely filled with plants and not at all passable, but we’d snuck through using goats paths! We’d found a beautiful spot.

There were a few clouds in the sky today, so the sun was a bit on and off. But, this could be for the best as when the sun is out it is very strong and we wouldn’t be able to stay in it for long if we didn’t have the odd cloud around to give us a break. We caught the interest of a wild goat or two, but they weren’t brave enough to sneak past our camp to find our food supplies.

The sea was crashing magnificently against the rocks and cliffs around us. O, coming from a landlocked country, was particularly in awe. As for myself, coming from Cornwall and having just spent a year on the coast of west Scotland – I felt comforted and homey by the lively sea.

Today was a pretty perfect day.

We stayed in the spot on the rocks for several hours. I sang some songs and O took some photos and videos. The wind picked up a bit later and we headed to our hidey hole for a siesta.

Whilst dozing, we felt a few drips. Is it raining? We thought we would be sheltered from the rain by the big rock cliff edge above our heads. We were confused for a bit but then realised it was actually raining properly outside our little protected roofed area, and it was only when the wind blew particularly strongly in a certain direction that it drizzled onto us.

O experimented with attaching a tarp above us and he worked out a brilliant set up. The rain however, seemed to have given up. I turned on my phone and exited our crevice to look at the sky, and also find a phone signal to get a brief weather forecast. Neither the sky or AccuWeather seemed to be hinting at more rain. We took the tarp down so we could make a fire without being worried about burning it, but would put it back up over night just incase. 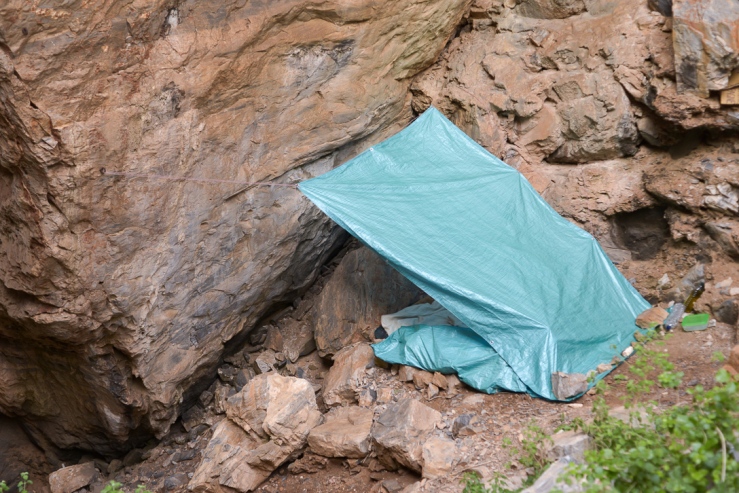 I found some wonderfully dry dead heather of some sort (I think) – dream kindling material – and some small twiggy bits of other plants and started a fire while O collected more substantial wood. Oh wow! Starting a fire in Southern Spain is incredibly easy when you’ve been starting fires in West Scotland for a year! The dry wood went up instantly. Finally, our first fire of the trip.

I made some tea and started preparing dinner – a weird combination of food as we hadn’t been sure we’d make a fire, but it turned out pretty yummy. (Also, our first warm meal on whole trip, apart from the tortilla we’d been treated to on the way to Madrid.) We dined on a starter of peanuts, followed by chopped up tomatoes, mixed and heated with mushy peas and flavoured with olive oil – accompanied by a side of fried baguette with semi-melted cheese on top. We finished up with a dessert of dark chocolate and grapes and the whole thing was delicious!

After such a good night of sleep last night, we were eager to get cosy again. The realisation that we could now wear less to bed meant we could also cushion our sleeping area with more clothes for even more comfort! We set up the tarp and headed to sleep.