This morning we woke up to discover that the guy who had left our dorm room last night had left quite a few goodies lying on his bed – apples, oranges, yoghurts, chorizo (that looked homemade), a very useful tupperware and a blanket.

You can’t beat waking up to a pile of freebies!

We had a lazy breakfast (toast marathon), making the most of the late check-out time and then packed up our stuff and headed into town for a bit. 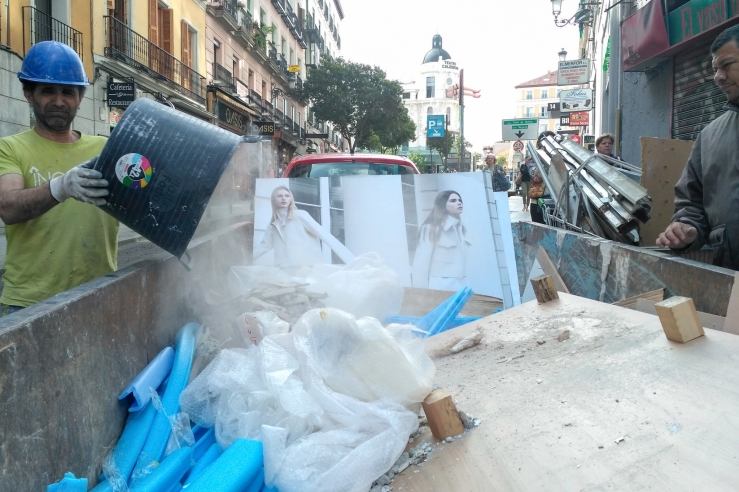 After a little wander around Madrid, we stocked up on some essentials (hummus) in the supermarket and headed to a spot we’d picked out from Hitchhiking Maps, near San Cristobal metro station.

In the supermarket, we got a bit excited about the cheap Spanish prices and also suddenly realised how well behaved we’d been on our trip so far, so decided it was time to treat ourselves to some wine. We got a baguette, a big tub of hummus and a bottle of wine all for €3! We didn’t want to put off potential lifts by drinking wine by the side of the road (where we would be eating our lunch in shifts, as usual), so we poured it into a black bottle I’d acquired from my last project in Scotland. 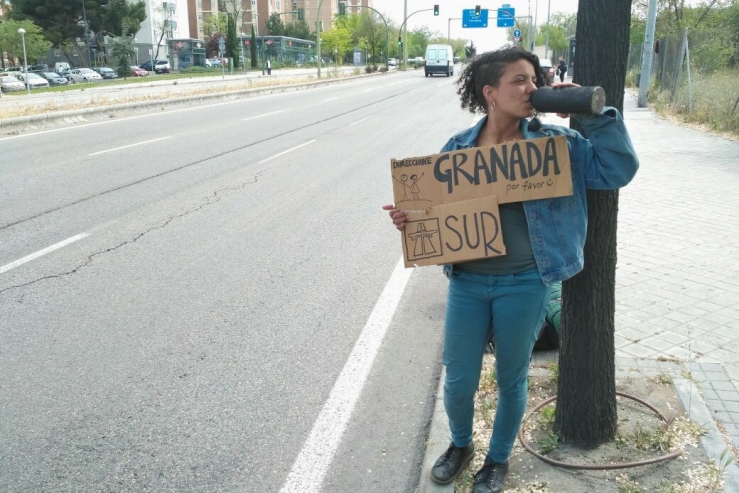 F had warned us yesterday that we would find it tricky to hitch out of Madrid, and he was right. We didn’t encounter any rude drivers here (there were a few in UK and France), they either just completely ignored us or looked very confused – it seems hitchhiking is not common here! However, in some ways it was easier to keep smiling than some other places have been – just because it was so funny to watch the reactions on people’s faces.

However, after two and a half hours, we could still count the number of positive acknowledgments we’d had on one hand. A couple of teenage girls walked passed us and stopped to read our signs.

We laughed and told them we were doing it ‘for fun!’

They shook their heads and waved a finger. It seemed like they were saying no cars would stop for us.

Soon after this, a couple walking past with a pram also stopped to look at our signs. They had no English, and us very little Spanish so our conversation was a little confused to say the least. But basically, they seemed to be trying to say they could go and get a friend, who had a car, to drive us somewhere. Then the woman motioned eating and looked concerned. We shook our heads.

We gestured that we were happy and healthy and I showed her our bag of food. They still seemed confused, but we said our goodbyes. It seems that people here are assuming we must be homeless to be hitching a lift! We even showered this morning!

We were trying to remain positive, but at this point I was mentally preparing myself for another night in Madrid.

After three unsuccessful hours in the same place, we walked 4km (actually much further because of having to take the pedestrian route and avoid train tracks) down the road to a petrol station. When we got there, we decided it might be time to try a different approach. We’d posted for some help and advice on the Hitchhiking in Spain Facebook group and received a response from a helpful Spaniard suggesting we go to a petrol station and approach people directly. It was time to brush up on some Spanish phrases.

After a quick photoshoot by a map on the wall, we sat down at the petrol station and consulted our translate apps. We decided that first we would make a new sign that was more conversational, then try actually approaching people and use the sign to refer (or point) back to. We already had a sign with a motorway symbol just saying ‘SUR’ and another saying ‘Directionne Granada por favor ☺’, so we propped these against our backpacks whilst we sat to write another.

So, we looked up how to say ‘Good evening! Are you going South? We’re going to Granada. Can we come with you please?!’

We had just finished our new sign and I was changing layers (it was starting to get much cooler) when a teenager waiting in a car beckoned O over. I watched this conversation from a distance whilst standing with our signs and bags. There was obviously some confusion happening and I saw O doing something on his phone and then showing it to the boy – probably maps or the translation app. A man came back to the car and got into the driver’s seat. The teenager spoke to the man, then to Ondra, and then O called me over.

The man and boy were going to Ubeda – a small town east of Jaen – and offered to take us there. O and I only needed to look at each other to agree on our ‘why the hell not’ decision, so we put our stuff in the boot (keeping valuables like camera etc. with us) and got in.

When we got in the car and set off the boy tried to speak to us but we couldn’t understand what he was saying. O handed him his phone so he could type into the translate app but it soon became apparent that this was very difficult for him. He was obviously struggling with spelling or maybe writing in general, but he gave it a good go and we managed to understand the first question he asked us.

We shook our heads and I actually laughed before I realised why he was asking, and then I felt bad for my automatic laughter. O wrote back, ‘we’re travellers’ and asked the boy if he was a gyspy.

“Gitano,” he nodded and gestured proudly to himself and the man driving.

The boy asked some more questions about us – where we were from, our ages etc. We asked him how old he was and he seemed to find it quite tricky to work it out. After a few minutes thought, he flashed both hands up and one hand up a second time. It seemed he was signalling fifteen, but we wanted to clarify.

He seemed unsure of the word, but nodded and flashed his hands again to confirm.

We were several hours from their destination, though it was obvious we would get there much quicker than the map suggested as the driver was keeping up a pretty steady speed of 150km km/h (sometimes more).  They also seemed to be playing some sort of game between them, the boy egging the man on to overtake and generally wind up other drivers.

This is the first journey so far where we have felt slightly less than 100% safe.

The boy was the DJ for the journey, playing very loud music – some different styles but mostly either what sounded like some kind of traditional Spanish music or what I interpreted as the Spanish equivalent of gangster rap (sirens in the background, aggressive vocal style mentioning ‘dinero’ and ‘carros’). I was fighting a cold or fever of some sort which seemed to worsen in the evenings and was feeling exhausted, but there wouldn’t be any sleeping on this journey.

At some point, the boy asked for O’s translate app.

“We leave you at Carrefour.”

It seemed the man and boy had been discussing the best place to leave us in Ubeda. Here started a rather confusing back and forth using a combination of spoken language, the translation app and hand gestures. We were trying to ask to be left at the last services before they left the motorway – O had found one on the map which wouldn’t mean them going out of their way at all, and where it would be easy to rejoin the motorway.

Due to our embarrassing lack of Spanish (although F’s prediction yesterday about Czechs picking up Spanish easily had been right – O was already picking it up much quicker than me, despite it being his first time in Spain and my fourth!), combined with the boy’s difficulty with writing, it was tricky to communicate. Also, I don’t think they really understood what we were doing. They had picked us up purely because they thought we were gypsies or something similar, because they thought we were like them – which I guess we sort of are. But they still didn’t really get the concept of hitchhiking or why we’d rather be dropped at a motorway services than at a big supermarket in the centre of town.

But we got there in the end.

They dropped us at a large service station at about 10:30pm. The boy pointed to a sign and grinned.

We were finally in the region that we were intending to spend the next week in!

We thanked them and said our goodbyes. I rushed in to use the loo, seeing on the way back that it seemed like a very relaxed services and like we could get away with sitting down for a bit without buying anything. So I got O and we went back inside, sat by the microwave (so we could use the plug sockets for charging) and collected ourselves – that had been our strangest lift yet! But it had worked out okay. It looked like this place must get busy during the day – there was a lot of seating.

We looked on a map and saw that there was a forest area very near by. We decided we would camp there, and resume our journey from this place in the morning.

After sitting for a bit, we made our way up the hill behind the services. We spotted a cow and adjusted our route a little as we didn’t fancy being woken up by being trampled on in the night. In the end we didn’t need to go as far as we originally thought we might, we ended up in what looked like old farmland of some kind – a grassy area, dotted with trees. There was some fencing, a lot of it incomplete. We found a corner that only had one unfenced edge and set up camp, excited for our first night with our extra blanket we’d acquired at the hostel!