After a morning tea and chat with our lovely Couchsurfing host, we said our goodbyes and headed to catch a bus to Guildford. We’d picked our destination because it was the furthest we could get with the £20 we’d acquired yesterday and after a quick search online, it seemed like it should be easy to hitch our way to Dover from there.

The bus dropped us outside a supermarket in Guildford. Although it was closed for Easter Sunday, we hovered outside to use their Wifi and download some new map apps and some offline maps of France and the area of England between Guildford and Dover. It was another sunshiney day and we were feeling determined and refreshed after our night in a bed. We edited our ‘are you heading EASTer?’ sign from yesterday to say A3 instead of A27 and headed to a spot on the way out of the town.

Within twenty minutes we were picked up by a smiley Polish man on his way to Twickenham who kindly offered to go out of his way to get us to the first service station on the M25. We thanked him and got in. He told us he’d done some hitchhiking in Poland and O commented that he has often been picked up by non-English people in England and that maybe English people were nervous because they weren’t used to seeing it so much.

“Well… You look like normal people.” Our driver shrugged happily.

We were happy to hear this as O always makes an effort to keep himself and his luggage looking neat and tidy when hitching. I think this is a good tactic in life generally and have  been doing the same – it seems to be working for us so far. We just aim to look approachable, safe and friendly and like we’re not going to make a mess in someone’s car.

At the service station, we chose a spot near the exit to stand. O took the first sign-holding shift whilst I caught up on some diary writing. It was a sunny Easter Sunday and we got a lot of smiles, waves and apologetic gestures from passing drivers. We’d only been there about twenty minutes when we heard a voice behind us from the lorry park.

“Mate, I’m going to Dover! Chuck your stuff in here, I’m just getting a sandwich.”

We turned to see a lorry driver opening up the compartment at the bottom of the lorry for us to put our bags in, and then heading in towards the service station. He laughed at our uncertainty as we looked from him to the lorry and back again, he reiterated that he was going all the way to Dover and would take us as soon as he’d gotten himself some food.

Today was definitely going better than yesterday! O organised our bags whilst I ran into the service station to use the loo and buy us some treat food.

Our driver arrived back before I did and we all got into the front cab. O sat on the other seat and I sat on the bed at the back whilst our driver hit play and blasted out some reggae. He was a friendly, funny guy, straight away warning us that he’d had a heavy weekend in London and asked us to excuse him as he tucked into his lunch.

“You know this is what they call an English burrito, right?”

He munched cheerfully on his giant yorkshire pudding, filled with meat and potatoes. It sure did look like good hangover food! 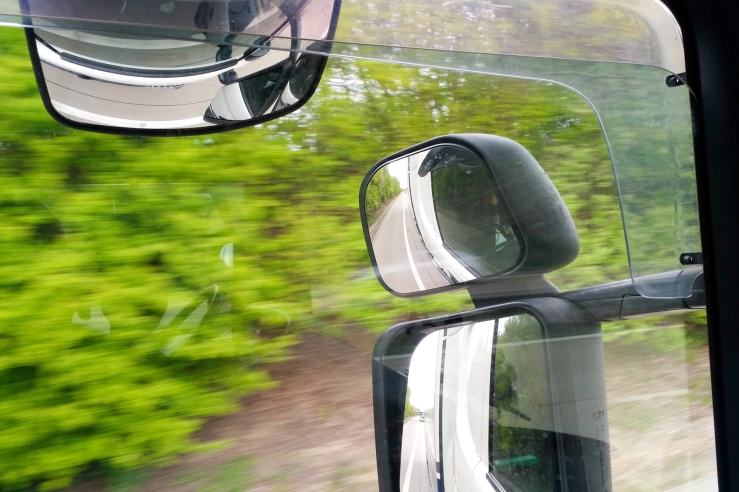 Our new friend was from Manchester, on his way to Belgium to fill up his lorry with chocolate – which seemed very fitting for Easter Sunday. He did this three or four times a week and had been driving lorries for fifteen years. A friend phoned him at some point and he spoke on loudspeaker as they discussed their weekend of partying in London. He told his friend he had two hitchhikers with him, mistook Ondra’s name for ‘Oreo’ which made us chuckle, and joked about why he’d picked us up.

Jokes aside, he told us that he often picked up hitchhikers and took them onto the ferry. He likes to help people out and it doesn’t cost him anything, so why not?

Being in the lorry meant we got given ‘routemaster’ tickets which let us into a special area of the ferry. Here, we got unlimited tea, coffee and orange juice and access to showers and discounted food. Our driver met some friends and we didn’t see him for most of the journey, but he kindly pointed out a table of Spanish lorry drivers to us.

O went over to them, armed with his translation app, to try and find out if they could take us any further from Calais or possibly even all the way to Spain. Unfortunately, they already had two people per lorry so couldn’t fit us in. We did get some tips on which route to take though, ie. what to write on our signs.

We drank a lot of tea and orange juice on the journey and snacked on the bread and fruit we still had left. It felt really good to be finally leaving the UK after being stuck in Portsmouth yesterday.

Our new friend did offer to drive us off the ferry and out of the port, but we decided to get off as foot passengers. We thought it would be less effort for us to walk to the point we’d meet the cars than it would be for him to drive us and then stop to drop us out 500m later.

As we began leaving the port, it became obvious that the cars leaving the ferry were behind a big fence. We were missing opportunities. We tried to follow it around and meet the cars at the end, but there was simply no access before the cars joined the motorway. We stopped for a bit to give hitching a go but there was barely any traffic where we were.

We decided to re-enter and hope that the security guards hovering with machine guns wouldn’t give us any trouble. They didn’t, and we managed to get back to the Calais port building. We sat down for a bit, put on waterproofs (it had started to drizzle) and wrote some new signs. We decided to give up on the port traffic and to follow the signs for the pedestrian route to the centre of Calais.

We walked through the town and found what we thought was a pretty good spot on the way to the motorway, but there was very little traffic. It was getting late and cold and drizzly so we decided to only stay there for half an hour, until 10pm, before starting to find somewhere to sleep.

We looked at the map to find the nearest green area and found a park nearby. When we got there, we discovered the gates were locked – it was only open 9 – 19:30. We considered trying to find somewhere else but it didn’t look like there was going to be many options from looking at the map. It seemed like climbing the fence and sleeping in this locked park might actually be the safest option – at least we knew we wouldn’t be disturbed, if we were discreet.

We found a corner pretty hidden from the road and the surrounding houses and O jumped over. I passed the bags and climbed up myself. Suddenly, we heard a car and lights shon in my direction. I froze for a second on the top of the fence, before jumping back down and we both crouched low to hide from the headlights. After a tense minute or so, the lights dimmed and we heard people get out and enter a house. When there was silence once more, I climbed the fence again and jumped from the top, dodging a bush on the way down.

We found a perfect little corner, protected by bushes – not visible from either in or out of the park, it felt private and safe. We set up camp and tried to get to sleep but it had suddenly gotten quite cold and the ground was pretty uncomfortable. I suddenly had a brainwave.

“Why are we not sleeping on our clothes?!”

Funnily enough, O had been thinking the same thing. We got up, unpacked our towels and softest clothing and laid them out on top of our base blanket. We got back into ‘bed’, putting one of our tarps over us to stop cold air coming in through the blanket and somehow, we eventually got to sleep. 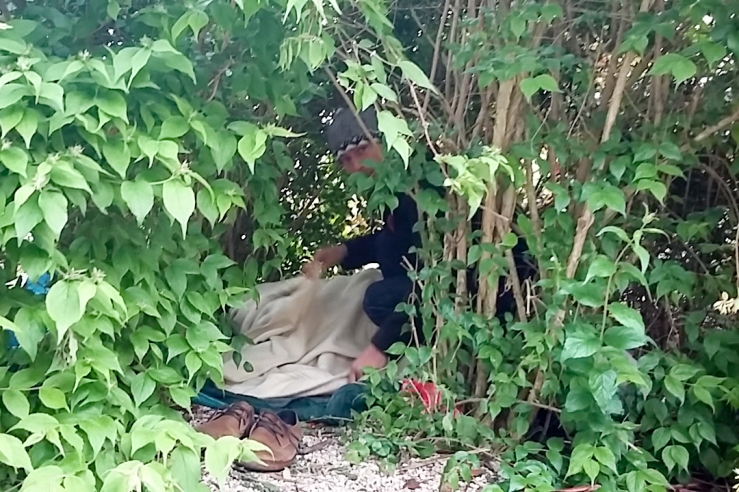